Innovative re-use of waste materials in the North West Division

The construction industry in the UK is a large contributor to landfill waste as compared to other industries. Waste has a direct impact on the environment and it has been attributed to a number of issues including poor air quality and increased CO2 emissions. Redrow aims to continually improve in the field of waste management and in particular, the proportion of waste sent to landfill. Our North West Division sets a good example for others to follow and through implementing circular economy practices; they have been able to benefit both environmentally and financially. Last year, the NW Division reported c93,000 tonnes of materials were re-used and diverted from landfill. This is 99% of the division’s total waste, and represents a cost-saving of £663,750.00.

So, how do they manage it? We caught up with Chris Hayton, a Project Engineer for the North West Division, to find out more. “The segregation and crushing of inert waste (including concrete) has been key to our waste management strategy. We have found ways to reuse waste on site, or transported it to other developments where necessary. We work with Kenny Waste Management Company to develop site-specific waste and materials management plans. It also has to be recognised that considerable effort goes into formulating plans with ground workers, and ensuring that these are executed correctly.” Chris has a strong knowledge of soils management and excavated materials, and applies his expertise to real scenarios on site.

At the Goetre Uchaf Redrow Development in Bangor, North Wales, more than 3000 Cubic Metres of used topsoil was screened to generate a clean topsoil by-product; which was subsequently reused. The reuse of waste products such as this has reduced the division’s transport emissions too. Approximately 195,368 miles of transport emissions have been eliminated through reuse (this is based on an average of 40 miles round trip).

The division’s recent achievements in resource efficiency can also be attributable to the commitment of management including Scott Howard, North West Commercial Manager, who acts as a driving force behind division’s waste strategy. Scott and the team have developed and implemented initiatives such as a monthly Divisional League Table for the amount of waste produced per site, which are displayed on staff noticeboards. Initiatives such as this have contributed to higher levels of employee engagement and information-sharing.

Through repeat use of materials, Redrow is demonstrating steps towards a circular economy model; increasing the value derived from existing structures, products and materials –rather than consuming new resources. This subsequently enables us to reduce waste from our activities. 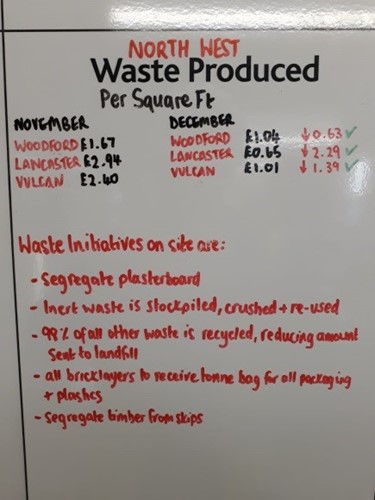